Posted on February 20, 2014 by Rune Reppenhagen 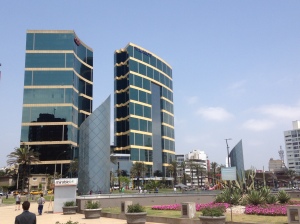 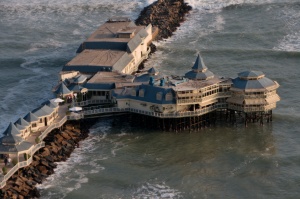 Cathedral of Lima – Archbishop’s Palace to the left

Last fall I went on a much anticipated vacation to South America. I hadn’t been down there for a few years and there where many places I hadn’t seen yet. There where a few countries I had never been to and some I wanted to see again. I booked my airfare about 9 month before the trip, flying into Lima, Peru, and returning from Santiago, Chile. The trip would bring me through Peru, Bolivia, Argentina, and Chile.

I stayed at the JW Marriott in Lima; it is in the Miraflores district close to the Pacific Ocean. I was upgraded at the hotel and ended up getting a nice suite that had a magnificent view of the ocean and the beaches, where there were a lot of surfers waiting for the next big wave.

Miraflores is known for a wide range of restaurant and for lunch on the first day I went to La Rosa Náutica, located on a pier on the beach a 30 minute walk from the hotel. There is a cliff separating the city from the beach and the ocean and there is a large shopping center called Larcomar built into the cliff in front of the JW Marriott hotel.

Walking up the hill again and another 8 miles or so further north along Avenida Arequipa eventually you will reach downtown Lima. I gave up about halfway and opted to take a taxi the last part.

Around Plaza Mayor there are multiple things to look at. On the north side of the plaza, behind a wrought iron fence, is the Government Palace. It has a large red and white Peruvian flag flying on the top which also makes it easy to spot.

On the west side of the plaza there were a few streets with many shops and restaurants and I sat down for a while to absorb the atmosphere and to enjoy a cold Cristal, one of the many very good Peruvian beers. 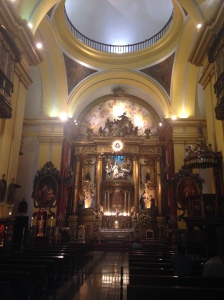 Parroquia del Sagrario which is next to the Cathedral

Christmas preparations and there were lots of people listening to a children’s choir singing Christmas songs. This was a nice touch, but even though it was the end of November, I felt Christmas was far away, especially considering all the future sights and places I was travelling to before Christmas.

Rune Reppenhagen is a native Norwegian who lives in Texas. He grew up in Norway and moved to the US to go to college in South Dakota in 1991. After a few moves back and forth between US and Norway, he has now lived in the US since 1996. Currently he lives in Austin, Texas and works for Emerson Process Management as a Product Marketing Manager.
View all posts by Rune Reppenhagen →
Image | This entry was posted in South America Vacation 2013, Travel and tagged Lima, Peru. Bookmark the permalink.