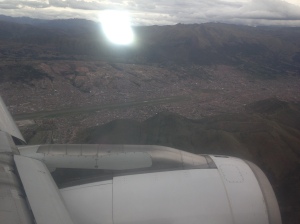 After a few days to acclimatize in Lima, I flew to Cusco. This meant going from sea level to 11,200 feet or 3,400 meters above sea level in less than 2 hours. I was warned against altitude sickness and had taken Diamox to prevent this from happening. Normally, I wouldn’t want to take the medicine, but I didn’t have much time to get used to the altitude so I opted to take it. Part of my research on Diamox revealed that it also is prescribed for glaucoma, and since I have glaucoma, I called my eye doctor who helped me make the decision to use it. Initially, I was concerned about the side effects, none of which ever materialized for me.

Rune Reppenhagen is a native Norwegian who lives in Texas. He grew up in Norway and moved to the US to go to college in South Dakota in 1991. After a few moves back and forth between US and Norway, he has now lived in the US since 1996. Currently he lives in Austin, Texas and works for Emerson Process Management as a Product Marketing Manager.
View all posts by Rune Reppenhagen →
This entry was posted in South America Vacation 2013, Travel, Uncategorized and tagged Cusco, Cuzco, Peru. Bookmark the permalink.