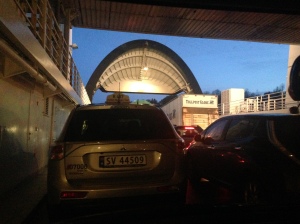 Leaving the ferry at Krokeide 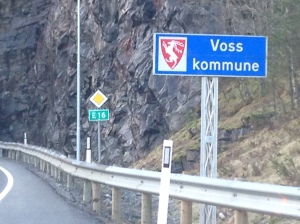 Not much snow this year under the cable car. 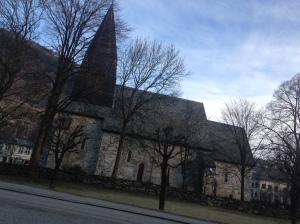 From the top of Bavallen

First on the T-bar at Slettafjell

Single chair lift at Hanguren closed down – mind my finger 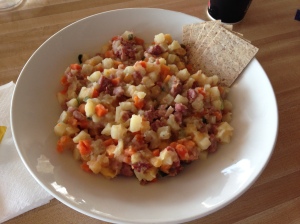 View of Voss from restaurant

Another view from restaurant

While growing up I used to take the train to Voss many Saturdays and Sundays in the winter to go skiing. I would take the bus (number 1 from Minde) to the train station in Bergen and then take the train to Voss, a train ride that would take about an our and forty five minutes. From the train station I would walk 10 minutes up to the cable car station where I could get a lift up to Hanguren. I had a season pass to the resort (then called Voss Ski og Fjellheiser) and had a voucher card for the train and I would bring hot chocolate and a big sandwich pack for lunch.

Well, it is now 2014 and it has probably been twenty years since I last skied at Voss. Two weeks ago when I was in Norway I decided I needed to go back and ski the slopes at Voss again. I was visiting my parents and they have recently moved to and island outside of Bergen, so I had to find the best way to get up there. I first had to drive 25 minutes from Drønen to Hufthamar and take the ferry to Krokeide. The ferry left at 5:55AM and took 35 minutes to Krokeide. The first picture is from the ferry as I am waiting to get off. From Krokeide I drove to Arna and then in the Vaksdal, Dale, and to Bulken and Voss. Finally at Voss, after about 3 hours of travel, I take a few pictures of Hanguren and the Church at Voss before I continue to drive up to Bavallen where I can park, get a lift ticket, and rent equipment.

The ski rental place was supposed to open at 9AM, and i was there at 8:45AM and walked into an open shop with no people in it. I tried to find someone in there to help me, but no one could be found and I contemplated finding my own equipment before I left to get my lift tickets. When I came back the rental store was locked and I waited until 9AM when it opened. Andy from Austria, who lives in Greece during the summer, helped me fit boots, skis, and poles and got it all together quickly. I was out of there in 15 minutes and even though the lift wasn’t supposed to open until 9:30AM I was dangling my feet from the seat on the Bavallen Express lift at 9:15AM.

There have been some new developments since I was last here. Last time I was here, maybe 20 years ago, there was a new quad chair lift added at Bavallen to supplement the original two-chair lift in Bavallen and a new T-bar lift was added from Hanguren to supplement the single chair lift there. Now the original Bavallen chair lift had been replaced with the faster quad express lift and the Hanguren single chair lift had finally closed down. From the top of the express lift I skied down to Slettafjell to find that the T-bar was still not running, but as soon as I arrived, the lift started and I think it is the first time I can say I was first up the t-bar at Slettafjell.

I don’t get to ski very often any more, and last time was during the Christmas Holiday at Hafjell in Norway. Then I skied for one and a half day and my legs were totally shot after that exercise. Needless to say, I was wondering how long my legs would last, especially since I was skiing alone and didn’t plan on taking any breaks except for lunch. I skied all over the mountains at Slettafjell, at Horgaletter, at Ståstølen, and at Hanguren, and continued until 1PM when I felt I needed something to eat.

I skied down to the top of the Hanguren Cable Car station and had lapskaus at the restaurant there. Interesting fact about lapskaus is that it still is the origin for calling people from Liverpool scousers. You can read more here or google it.

It was unexpected to see so little snow on the mountain below the cable car as you can see from the pictures both from Voss looking up and from the pictures from the restaurant looking down. This year has supposedly been one of the mildest winters in Norway with very little snow. When I was skiing here as a kid I would often ski down from the cable car station to avoid an hour long or longer wait to get down on the cable car. This would obviously not have been possible this year.

After lunch I continued skiing and my legs were holding out somewhat. I would have preferred to ski at Slettafjell and Horgaletten where the quality of the snow was the best, but found that the T-bar was preventing my legs from getting any breaks, so I decided to take the Tråstølen and Bavallen chair lifts every once in a while to rest the legs a little while being transported to the top of the mountain again. I skied until 4PM when the lifts closed down and after returning all the equipment, I traveled up to Tvinde, where there is a nice waterfall, to visit some friends I hadn’t seen in a while. Then I drove back to Bergen and Krokeide to take the ferry back to my parents house at Drønen.

It was a great day skiing and the weather was wonderful. Some of the locals working the lifts said it was the nicest day this year and I felt lucky to see the mountains in the beautiful sun light. It made me want to go skiing more in the near future, but what do I do when I live in Texas? I may have to drive a weekend over to New Mexico, but it may be late in the season there?

Panoramic view from top of Horgaletten

Me with Lønahorgi in the background.

Rune Reppenhagen is a native Norwegian who lives in Texas. He grew up in Norway and moved to the US to go to college in South Dakota in 1991. After a few moves back and forth between US and Norway, he has now lived in the US since 1996. Currently he lives in Austin, Texas and works for Emerson Process Management as a Product Marketing Manager.
View all posts by Rune Reppenhagen →
This entry was posted in Travel and tagged Bavallen, skiing, Voss, Voss Church, Voss Ski. Bookmark the permalink.